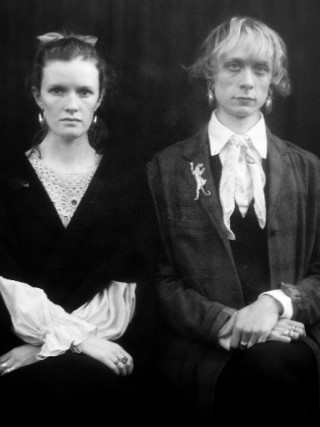 Voo Le Voo is an art project between Lily Ashley and Hugo Hamlet. Lily and Hamlet met at Philippe Gaulier’s school in Paris in October of 2017, Hamlet comes from Sydney where he is known as Iffy, music making Drag Princess. Lily, from Wales where she was performing as an actor and “Little” the poet.

In January 2018 they formed the partnership Voo Le Voo, a theatrical project that uses music, action and movement to bring joy, spirit and beauty to audiences worldwide. They combine aspects of clown, bouffon, classical and Meisner techniques to create sketches and full length performances that they polish with painterly aesthetic using their unified talent of art (Lily originally trained at St Martins and Hamlet at Sydney College of Art.)

They created a show “Mary Mary Quite Contray” in partnership with PowerPlay Theatre Company which was performed in November of 2018 at the Cockpit Theatre. They recently performed their brand new cabaret act at Crazy Coqs, Live at Zédel’s in Picadilly, London. The show is getting ready to tour in the summer of 2019. Watch this space.