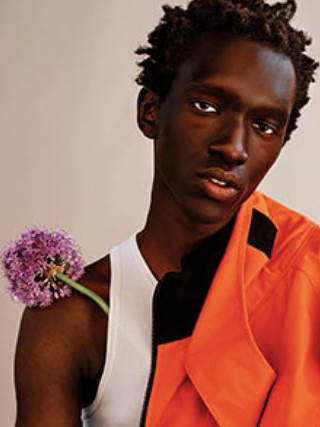 Wilson is an artist and environmentalist. Initially focused only on image as a medium to communicate his concerns, his work has since gone on to include video, sound and sculpture. Aside from his own independent projects, Wilson has also worked as a performance artist for others including Frieze London, as a group performer for Asad Raza, and also as a solo performer for Lina Hermsdorf - as part of the Frankfurt Staedelschule’s 2016 Rundgang activities.

His natural style and looks have brought him to the attention of the fashion industry. Wilson is now working with many influential photographers and magazines, including Tim Walker, Tyrone Lebon, Harley Weir, Ezra Petronio (for Love Magazine), GQ, Luncheon Magazine and iD. Wilson was also featured as a member of the 2017 Dazed 100 most influential list and more recently Wilson was shot for the 2018 Pirelli Calendar, as well as starring in campaigns for Versus Versace and Hugo Boss.